Will New Tool Help Dementia Patients and Their Doctors?

Long-term care providers could soon have access to a newly developed tool that can accurately predict the life expectancy of dementia patients.

Dementia is a non-specific clinical syndrome that involves cognitive impairments with the level of severity to interfere with social or occupational functioning.  The disease negatively affects at least two areas of cognition – memory, language, reasoning, attention, perception, or problem solving. Some of the most common types of dementia are Alzheimer’s disease, Lewy body dementia, frontotemporal dementia and vascular dementia. 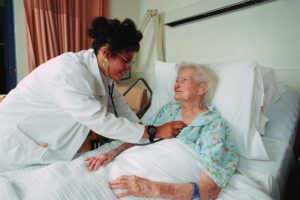 Memory loss by itself isn’t necessarily dementia because there can be many other causes of memory loss. Stress, anxiety depression, or chronic alcoholism can cause memory loss as well.

McKnight’s Long-Term Care News’ recent article entitled “New tool predicts life expectancy of dementia patients” reports that almost half (48%) of residents in nursing homes have a diagnosis of Alzheimer’s disease or other dementias, according to data from the Centers for Disease Control and Prevention.

Researchers think that a new tool used to predict life expectancy for dementia patients could help these individuals as well as their care providers better communicate about the disease and develop future care plans as it progresses. The tool uses four characteristics: sex, age, cognitive ability and comorbidity factors.

“In those cases, a tool like this can be an incentive to start such a conversation, which should be held before there are too many cognitive obstacles.” said Sara Garcia-Ptacek, a researcher at the Karolinska Institutet in Sweden.

She went on to note that this discussion could be about where someone would prefer to live – at home or in other accommodation – or anything else that needs planning.

In the intensive research, investigators tested the tool using data from more than 50,000 patients who were diagnosed with dementia between 2007 and 2015.

These researchers found that that the tool was able to predict three-year survival following a dementia diagnoses with “good accuracy.”